So you’re all ready to purchase your first scale model train but have no idea what all these model train scales and gauges are that people keep talking about?

Well, it’s pretty simple once you understand the lingo!

Now, if it was 1:48 (which is O scale), it means that its 48 times larger than your full sized model train replica. The right hand number is just the multiplied size of how much smaller your model is. If it’s 1:220, then your train is 220 times smaller than your actual train and so on.

So what are train gauges? Well, they refer to the size of the train tracks that your trains will run on. They’re normally standardized, but there may be a little bit of wiggle room depending on the manufactures, so always double check before you purchase. So something like HO scale means that your train is 1:87, or 87 times smaller than a full size train, and the gauge means the train tracks are .625 inches across!

So let’s look at some train scales and gauges!

HO scale are the most popular scale of train model making in the world. HO are 1:87 of a full size train, and run on a gauge of .625 inches or 16.5 mm. The reason they’re so popular is that they’re small enough to be applicable for the everyday hobbyist who is looking to build their own layouts.

They’re also big enough to keep in a lot of detail so they look like great trains. Once you start getting smaller than this, you’ll find that a lot of manufacturers have to cut out little bits and pieces of a trains detail by simplifying it for manufacturing.

Because this is the most popular model railroad train size, it also means that there are more accessories in HO scale so you’ll be able to build nearly any themed layout that you can think of.

O scale trains are almost twice as big as HO scale trains. O scale trains are 1:48 scale, and run on a gauge of 1.25 inches or 31.8mm. Due to the nature of their size, they can be a little too big for a model train enthusiast to build a half decent layout in a small house or apartment.

Because they’re big however, they normally have immaculate detail and are really well manufactured, so they work great as set pieces if you’re looking to have a specific model railroad train on your shelf. The cheaper models work great as children’s toys because they’re big enough to not be swallowed and are normally pretty durable, but obviously do your research on the model first!

N scale trains are relatively popular purely because they’re so small. They run a model t rain scale of 1:160 and use a rail gauge of .375 inches or 9mm.
So what’s so good about these trains? Well, the fact that they’re so small means that you can normally build a huge train layout on something as big as a coffee table or even smaller. These trains are normally about the size of your finger or a little bigger, so you can imagine how much space you’d have on your computer desk right now!

As they’re so small however, you do need to keep in mind that some of them might lack the detail you’d find in an HO scale train, so do your research on the different types of N scale brands out there, because there are some really nice ones!

So what’s so good about the Z scale train? Well, the fact you can take it damn near anywhere with you. These are the kind of trains you’d use to make snow-globes with or mini-dioramas.

Given their tiny scale, they’re actually still incredibly detailed if you look into a good manufacturer like Atlas or Peco.

G scale is often referred to as Garden Scale, although the G is technically from the German word Gro, which means Big. They use a scale of 1:22.5, so are much bigger than any other scale! They use a train track gauge of 1.75 or 45 mm.

Because they’re so large, people tend to place them outside in their gardens, hence the name. Because of this, they’re normally a pretty durable model type because they have to brave the elements a bit more than other models.

The best part about running a G scale train is being able to use the outdoor landscape in some of your designs, running them up hills, or down garden beds etc. 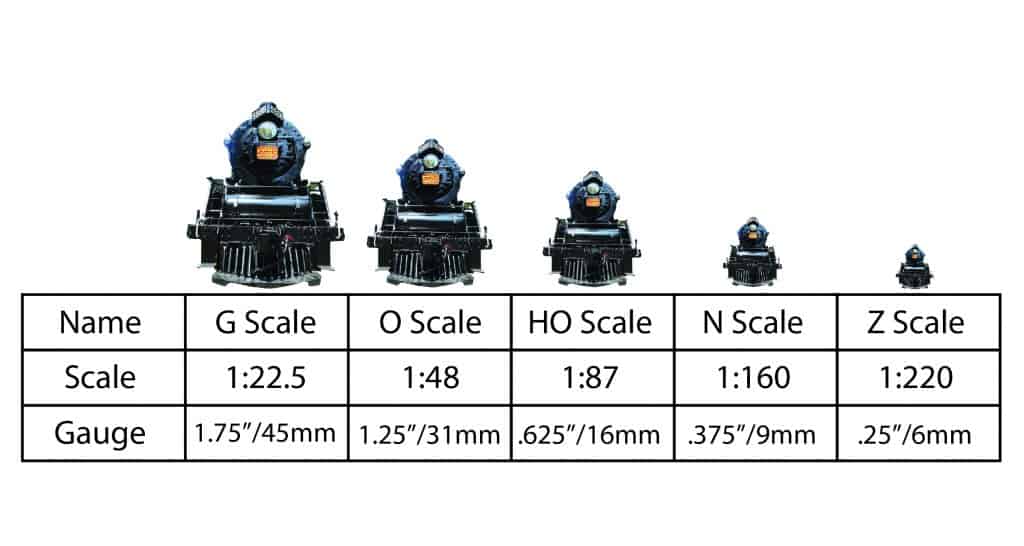 There are also a number of other alternate scales that are out there that are not nearly as popular. These include things like the S scale trains (not to be confused with the term Standard Train Scale) which were first manufactured in 1896. These S scale trains are a 1:64 scale and use a gauge of .875 inches or 22 mm.

Other scales like T scale trains run at a 1:480 and were only introduced in early 2007. They use a gauge of 0.118 inches or only 3 mm. At half the size of Z scale trains, these are ridiculously small and aren’t widely manufactured, making them a little pricey and a little harder to come by in your local hobby shop!

4 thoughts on “Model Train Scales Explained – [The 5 Most Popular]”