HO or H0 scale trains are the most popular scale of railway models in the world. HO come from half an O scale, so it’s built at 1:87 scale.

HO was created initially to be more suitable and cheaper for manufacturers, and as a result has become the leading scale of model trains in the world.

So what’s the whole point of modelling a train in HO scale? Well, for the enjoyment of course! That’s really the only answer for modelling trains in general, and HO is just the most cost-effective, detailed and readily available option out there.

Because the scale is 1:87, it means that a model train is 87 times smaller a full-scale train and the tracks are normally only .625 inches or 16mm across. This means they’re small enough to fit just about anywhere, so the every-day hobbyist can find room in their house. 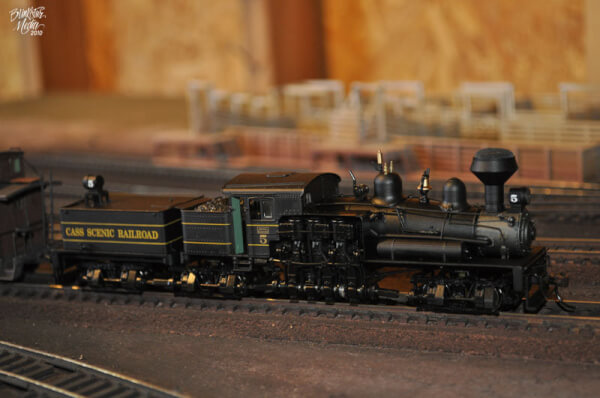 In 1935 a new gauge was introduced to the hobby of model trains, called half nought gauge. A gauge is the distance between the rails and the tracks were made from a single sheet of metal.

Finally, in the 1950s, manufacturers had solidified a standard scale and gauge and HO scale entered the market to challenge the dominance of a traditional O scale model train.

In the 1960’s it skyrocketed in popularity to become the most commercially popular scale and has remained that way ever since.

Over the years, they’ve gone from being less of a kids toy to more of a collector’s item, with manufacturers taking the time to get details of all makes and models around the year 100% as accurate as possible.

To build a model train layout, the first thing you have to do is work out what kind of setting or scenario you’re looking to create.

You can base this around 2 things; the kinds of trains you want to run or the kind of scenery you want to place.

These could be settings like an old west town, a modern day British railway, an alpine mountain or even the age of the train model you’re trying to run, and keeping all the outlying scenery (houses, roads, cars etc) in the same year.

The one big thing you need to remember is that the backdrop can be a little tricky to work out. Some people like to not have it, others use a neutral blue or black colour and some people use bought backdrops that are picture perfect.

Other things to consider is the area and surface you have to work with. Are you building on a free-standing table, or something against a wall?

If it’s in a corner, maybe you’d like to put a mountain in the corner as seeing a train all the way in the back might be a bit hard.

One of the things you need to consider is that if the ho model train layout is primarily for public display, you need to add elements that are eye-catching and attractive to people. For example, adding details other than the train itself can help your scene be a standout!

Another factor you need to consider while making your HO scale train is to make sure that the setting, especially the buildings and landscapes, are sturdy. You don’t want your scenery to fall apart easily, especially if say a train goes over a bridge. As cool as it would look, it’ll be a costly mistake! 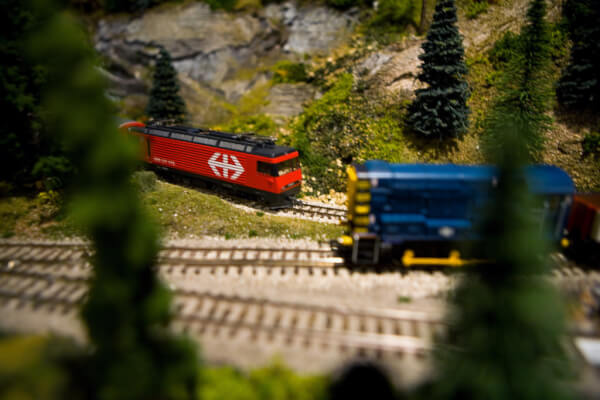 The standard gauge in HO scale train sets is .625 inches or 16mm as that is proportional to a ratio of 1:87. This means that in real life the gauge of a rail track is 4 feet.

The material that you can use in crafting your scene includes thinks like aluminium, plastic, steel, wood, cardboard, paper or nearly anything else that you can think of to make it work and look good!

When fastening your parts together, make sure you use any glue, screws or nails carefully as they’re going to make your model appear unrealistic and will stop it from being so immersive.

As for the electrical part of an H0 scale train model, the wiring harness needs to be a minimum of 16 gauge wire to run 16 volts at maximum throttle. So, the voltage varies from zero which is when the train is stationary to a 16 where is at maximum speed.

There are many more electrical elements that you need to consider while you are designing your model. If you forget about the wires early, you will have problems with the design later in the production because you might need to rip up scenery to run wires underneath. Nothing is worse than spending time on a crossroads only to rip it up because you forgot to run wire for the stop-lights!

Lighting can be especially pleasing in a scenery, and often helps with the immersion, so it’s definitely something you should consider early on in your scene.

The base your train sits on is something you obviously need to think about early on, but it’s one of the more important steps to consider.

Is it big enough?

Can you easily expand in the future if you want to?

Will it hold up your layout forever?

Can you easily access all areas you need to?

If you don’t think about this stuff and have to remove portions of your layout at some point to get into other areas, you’re going to have a really bad time.

Another important thing while constructing the model is to make sure all the parts are correct and you fix any problem before putting it all together. If you put them all together and then find a problem it can ruin your whole model or mean you have to start all over again. But correcting problems as you go helps you spend less time on rebuilding and more time on the details of your layout and the train itself.

Many people are attracted to model trains, whether it’s the actual trains, the scenery building, or just from a love of real-life trains!

If you are, you should definitely try modelling your own HO scale train setup. The reason the HO scale is probably the best one to start with is that it’s already so popular, there are more options available at different price points for a beginner, or a veteran!

Or this one if you wan’t to jump straight into the best brands of model trains!

5 thoughts on “HO Scale Trains [What you need to know!]”