If you are very passionate about model trains, chances are you’ve always thought about building your own!

Heck, maybe you already have.

The N scale is very popular, but for a lot of people, the lack of space pushes them to even smaller scales. And that’s where the Z scale train sets come into play.

The thing to notice here is that whenever you want to create a model railway landscape, you have to figure out the scale. Not only does this affect the model train types you use, but it also affects the landscape size and a variety of other things too, including cost.

You need to have all these things nailed down before you start creating anything.

So read below to find out if Z scale trains and layouts are right for you. 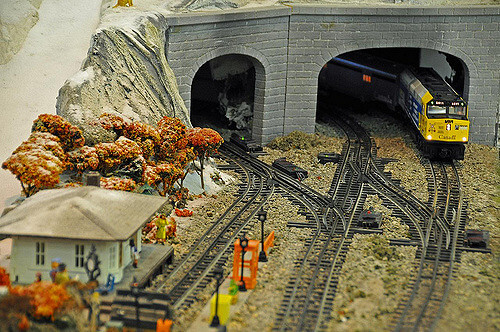 What are Z scale trains?

The Z scale trains are model trains that have a scale of 1:220. That makes them smaller than the N scale, but not by a very high margin (N scale is about 1:160).

Another thing to keep in mind here is that the track gauge is 6.5mm or 0.256 inches in total, depending on the track used.

What makes the Z scale train so interesting is that it’s tiny and you can easily play around with it as you create a very detailed landscape. You get to use a lot more space for the landscape itself, yet at the same time, the trains are visually appealing and super detailed despite their size.

Thanks to modern production methods, they’re as detailed as something you’d find on an HO scale train, so you’re not missing much these days.

Just like all the other model train scales, the Z scale locomotives can have digital decoders and DCC components so you can have independent control.

You have a lot more leeway when it comes to this, and the experience only gets better and more rewarding when you begin to familiarize yourself with it.

Moreover, landscape items like animals, human figures or houses are readily available online. So if Z scale is something that you’re interested in, you won’t lack for extra accessories and components.

The first Z scale trains were created in 1972 by Marklin, a well-known manufacturer from Germany. They wanted to create something smaller than the N scale, and he chose the 1:220 (Now known as Z scale) because he believed this would be the smallest model train size and no one would ever go smaller – and to some extent the manufacturer was right.

Even if there have been attempts to create smaller scales, such as the T gauge (1:450), it’s safe to say that these remain niche products and not something widely used or available at this time.

In fact, a Z scale locomotive created by the company entered the Guinness Book of World Records by running for 1,219 hoiurs without stopping before having a motor failure. This is a huge achievement for something this size, and it shows the durability and great potential offered by Z scale trains.

At first, the Z scale trains were popular in Europe, primarily because that was Marklins main market. However, since the 80s and particularly the 90s a lot of people in the US and Japan have started using this scale as well.

At first,  Z scale trains were a really expensive piece of model railroading equipment due to manufacturing costs, however technological advancements have brought the prices down considerably over the years, and are now comparable to other scales.

There were multiple attempts to use digital controls for Z scale trains, however, these were unsuccessful until the early 2000s. This is when the DCC standard started to be more and more popular.

Nowadays you will notice that the Z scale is a very mature, impressive scale that has basically the same features as what you’d find on any other scale. You can find Z scale rolling stock, trains, carts, locomotives, buildings and so on.

While it still requires quite a lot of attention to detail and care, the Z scale is certainly an amazing one, especially for those living in a smaller apartment or house.

What are the advantages of Z Gauge train Sets?

There are a tonof things about Z scale trains you’ll love!

The major one is that you get to create a more elaborate layout since the tracks and the trains themselves are smaller. This means more space, more layout, more detail!

You can make a more accurate and visually impressive landscape even if you lack space. Some people create Z scale landscapes on a regular coffee table, and those can be extremely detailed.

In addition, they are great presentation pieces.

You can take them from one place to another without having to worry about lots of luggage. And in many situations the Z scale allows you to use longer trains and more realistic curves. The primary focus is on practicality and on a much better experience, which z scale trains tend to achieve better than most other scales.

Are there downsides to Z scale trains?

The thing to realize here is that the Z scale trains are very small. That means you need to pay a lot more attention to your trains. The track needs to be clean at all times, as dirt or even dust can stop your models from working the way you want to – A grain of dust goes from a pebble to a full blown rock at this scale.

Another problem that can occur is trouble going up a grade (or slope) because the trains just don’t weigh enough. That sounds weird, but its because they’re not heavy enough to reliably gain traction to pull itself up the hill. This can be fixed and adjusted for with things like traction tyres howevever.

While these are not dealbreakers, you do have to realize that sometimes the Z scale trains can be a bit harder to manoeuvre and they need more maintenance.

But once you have all of that nailed down, the results can be quite impressive.

As you can imagine, the Z scale train market is not as big as the N scale market, and even less again than HO or O. However, their are still plenty of amazing manufacturers on the market!

When thinking about your layout, the idea is to create a list with all the items you want, and then you can check the market to see whether the manufacturers below can fulfil your needs. Even if the market is not as powerful as other larger scales, there still are lots of great companies ready to help you.

Most of them will manufacture what you’re after, or something similar enough that customizing it won’t be too much of a hassle.

At first, the Z scale trains ran on an 8V DC track, however, since 2000, all the Z gauge train sets are running on 10 V DC. The interesting thing is that the accessory power has always been 10V AC, which might be one of the reasons why all locomotives and tracks are not using this voltage

Materials used in Z scale can vary a fair bit, with some made from a plastic or cheaper metal, through to immaculate die-cast metal trains. More often than not, the accessories are made from a plastic or a light metal, like aluminium. Every manufacturer has its own set of features and requirements, and that’s why you need to study the market closely to get the best results and value. 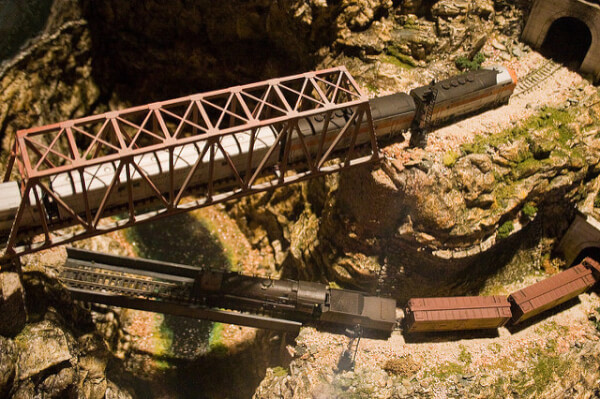 How to build Z scale train models and layouts

What are Z Scale Couplers?

Z Scale Couplers are a very small but important part of the train. They are very important because they offer great visuals and at the same time there’s a true focus on the operative aspect as well. What you want is to have a very realistic coupler close to the scale dimension. The focus of the coupler is to connect rolling stock in the train. While the Z Scale Couplers are mostly with a standard design, you will find a multitude of different options to focus on, and they really stand out with their great quality and attention to detail.

What are Sound Decoders for Z scale Trains?

The Sound Decoders for Z scale Trains will allow you to add sound to the locomotive. It really makes it a lot more interesting from an experience standpoint, and you are free to adjust and adapt the process as you go along. The quality itself is staggering and you will find the approach to be very dependable. It’s definitely the type of addition you need in order to make your model a lot more interesting. You will find it a bit hard to add, especially on the older models.

What is the best track for Z scale?

You will need the 6.5mm gauge track for the Z scale. That being said, when it comes to manufacturers, you can choose between companies like Marklin or Micro Trains. They are both very reliable and dependable, and you will be very impressed with their true value and efficiency. You should totally give them a try and see how well they work in your own situation. For the most part each one of the manufacturers is good, but those two are a bit better due to durability and quality. Then again, you are paying a premium!

Tips and FAQ to remember

It’s extremely important to create the right plans early on. That’s especially true if you want to have an elaborate landscape. Proper planning can do wonders, and it will also make things better and easier for you in the end so you dont wasnt materials and your own time.

In addition, try to set up a budget beforehand. Most of the time you do end up over the budget anyways, but at least you will have some sort of control over how much you spend. As always, use the best brands on the market. Not all Z scale trains are high quality, some of the brands deliver a lower quality.

That’s why you want to avoid knock-offs from China that have a low-quality production. The aforementioned US brands are much better if you want higher quality results.

As you can see, it’s amazing to create your own Z scale train collection and landscape. You do need to dedicate quite a lot of time to make it work, but the results are astounding and you will be more than amazed by the value and efficiency in the end.

Make sure that you stick to the requirements and voltages too. The last thing you want is any type of problem. Compatibility is key, which is why we recommend you to get most of the stuff you need from a single place.

That reduces any potential problems that can or might appear at times. In the end, the Z scale train is great for most model train enthusiasts, and this should help you learn more about it!

Want to learn more about model railroading in general? Read our Ultimate model train guide! OR, if you want to know about other train scales, read our model train scales explained post!

12 thoughts on “Everything to know about Z scale trains”