So you want to get into model railroading, but don’t know where to start? Well, there’s a lot to consider. Especially what model train scale is best for beginners. This’ll be a short post because it’s a pretty straightforward answer.

So what’s the best scale for a beginner?

Because it’s the most popular, and for a good reason!

That’s not to say that other scales aren’t just as good. The main thing to take into account when picking a scale to start modelling in is what size room you have to work with.

If you live in a tiny one bedroom apartment, HO won’t work for you because you’ll have no room to do anything! So, in that instance N or Z scale would be better. Or if you want to build outside, pick a big train scale like G or even O scale.

So, back to HO scale for a minute!

What’s so good about HO scale for a beginner apart from it being popular? Well, that’s kind of the point of a good beginner scale. Because it’s so popular, there are not only so many different products out there, but there’s also way more information out there if you ever get stuck.

HO scale modelling has been the most popular since the early 70’s because it’s a size that allows for plenty of detail but is still manageable for an interior home layout.

Every single big and small manufacturer of model trains will have at least one or two HO scale models in their production, if not more!

This is great because it means that if you start in HO scale, you’re more than likely going to be able to find any train you want a scale model of, no matter how obscure.

One of the hardest parts of model train layouts is getting all the details right! Because HO is the most popular scale, it also means that there’s more buildings, tunnels, bridges, cars, people, trees and anything else you could ever want. It means that as a beginner you won’t have to try and spend time making your own buildings or doing too much modelling early on until you’re more comfortable with the hobby. 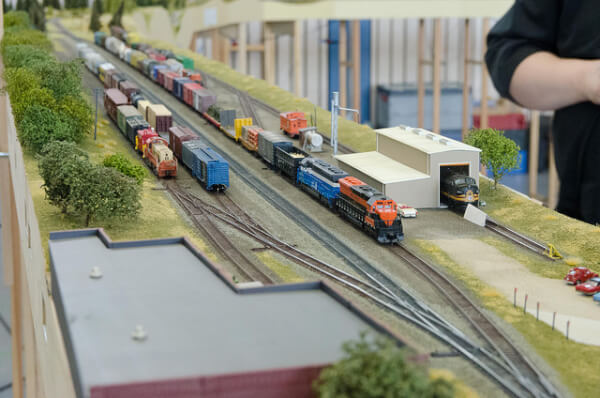 So what if you don’t have enough space for HO scale trains?

Go with N scale locomotives! They’re tiny in comparison, and you’ll be able to set up a fantastic railway layout on something as small as your coffee table, so you have no excuses.

N scale has been growing in popularity for years now, and if it keeps going, it will eventually rival HO scale trains. What makes them so popular? Well, the size more than anything. With today’s manufacturing abilities, you don’t lose any of the detail even though they’re the size of your finger.

So as more and more people start living in apartments and smaller homes, this is a perfect alternative.

Because they’re not quite as popular as HO, you might have to make some exceptions. Not everyone manufactures N scale locomotives, so you might be unable to find your favourite train. Or, you’ll have to get creative and make some of your own scenery, which is a great and rewarding challenge anyway.

The bottom line is, there’s no real harm in picking a different scale if that suits you the best. So if size is no issue, start with an HO scale layout because it’ll be easiest to find parts. If you’ve only got a small area, start with an N scale layout.

Ready to buy your first train set? Have a look at our best model train brand post!

Or still not sure what to get? Dive into everything you need to know about model trains!

2 thoughts on “Best Model Train Scale For Beginners And why it’s HO!”