You might have heard it talked about or seen it come up in an article or two, but still, have no idea what DCC train control or DCC controllers are?

Well, it’s one of those things that’s simple on the surface and a little complex underneath.

So let’s jump straight into learning some more about DCC train controllers and DCC systems!

What Is DCC Train Control?

DCC stands for Digital Command Center, and is a way to let you run multiple trains on a track! It’s essentially a model train controller. That’s the simple part.

If you’ve already got a model train set up, you’ll know that you only really need two wires connected to the track to get the train rolling, by supplying a steady current to the track. This is considered the ‘analog’ method of running model electric trains, and if you’re only running one around a track, this is still a perfect method.

Why do you need to know about DCC Train Control?

But what happens when you want to run multiple trains around a track? Or at different speeds? Or even in opposing directions?

Well, then you need to go from analog to digital and install a DCC train control unit. This computer unit that connects to your tracks will run a continuous voltage along the tracks, and interact with a control unit inside your trains that will change speed and direction individually.

This does mean, however, that your model train is going to need to have a Decoder inside its train to read those signals.

A lot of trains these days come with them built-in, but if you have an older model train, there’s a plethora of videos and articles out there on how to make the switch. (we’ll have one up soon!)

What does DCC Ready mean?

Being DCC ready means that your train is equipped with a DCC decoder, and is ready to run digital, as opposed to an analog system.

So what does the Decoder do? Well, your DCC controller is going to send packets of information along your now wired line to the decoder with an address attached to it. If it gets to a train with the wrong address, it moves down the line until it finds the right one and delivers the information. The same way your mailman delivers mail.

This information tends to primarily be speed, direction, and lighting, although some will have fancier options depending on your trains.

What’s involved in a DCC setup?

There are several different elements that make up a DCC setup. These include:

So what do they all do?

The DCC throttle is the part that you get to play with once it’s all set up. The throttle is oftentimes called ‘The Cab’ because it’s similar to having all the controls like you’re sitting in the cab of a locomotive.

This means your Cab or Throttle is going to have a knob or lever to help adjust speed, as well as other buttons for the direction the train should be going in, whether it should slow down or speed up, apply brakes, turn the lights on, or off, ring the bell or blow its whistle or anything else you can program into it. This part depends on the type of DCC controller setup that you purchase, as to how many knobs, buttons, and bells it has!

This is a pretty stock standard component that you’ll be familiar with. It supplies power to your Command Station, Booster, and Throttle if need be.

The Command Station houses a small microcontroller or computer chip that processes all the information that the Throttle is sending out, and transmits it down the rails until it reaches the correct Decoder to hand out that information.
From there, the train will do whatever the information passed through asks of it; speed up, slow down, brake, turn on-off the lights etc.

A booster is essentially just the component that takes power from the Power Supply and funnels it into the Command Station so that everything runs smoothly. Down the track, as your layout grows and you get more model trains, you’ll require more power and have to purchase more of these.

Arguably one of the most important parts of a DCC controllers setup, the decoder is responsible for getting all the information sent from the Throttle through the Command Station and then making the train do what it’s told. They’re essentially little computer chip brains that are placed inside your model trains to tell them what to do.

Decoders are also programmable, which means that you can change what they do and how they do it if you have the know-how. This means you can change things like your engine’s performance, how the lights behave or the whistle blows, and even change the address that the Command Center is looking for.
This is a fancy way of saying that if you have two decoders running in a single train (multiple engines or complex lighting) you can control them both at the same time by setting them to the same address.

The Best DCC Controllers of 2021 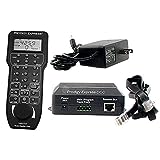 This DCC controller is the perfect starter model that will help you from the time you first get into DCC, to the time you’re an expert!

It’s a pretty easy DCC system to get up and off the ground, and the fact that it’ll let you program in up to 28 accessory functions means you can have noises for your locomotives as well as surrounding areas; waterfalls, towns, crossing lights etc. to really help bring it all to life.

What’s the best way to make it work?

Getting your DCC controllers all set up is normally a pretty straightforward task. It works much like a regular control unit for your model train layout but has a few more steps involved.
These steps, however, depend on the model of train DCC you’ve purchased so you need to read those instructions carefully.
The most labor intensive part about setting everything up is normally making sure that the decoder is programmed correctly for your command center to recognize, and then troubleshooting anything you may have overlooked. Setting up your decoder can often be as simple as just making sure that the address is correct, so you can control the speed from the Throttle.

General model train layout rules apply as well. Making sure that your trains can run around the rails smoothly, everything is connected nicely, and that you have somewhere set up to house your DCC setup.

What else should you know about your DCC train setup?

There are a lot of pro’s to having a DCC system, but there are a couple of cons you should be aware of;

Price – Things can get real expensive, real quick, especially for a beginner. Cabs/Throttles and Command Centers (the guts of a DCC setup) start at about $150 which is pretty good for beginners but can run up to $1000 easily for larger setups with all the fancy bells and whistles. Obviously, a beginner has no need for a $1000 setup straight away, but even at $200 for a DCC setup, plus a couple of extra decoders for your trains can set you back $300 or more before you even turn it on.

So what’s the best DCC system? Well, purchase something around the $200 range if you want to sink your teeth into it. This will give you everything you need to get started, and as you look into buying more trains, buy ones that are DCC-ready. This saves you the hassle of having to buy more decoders and install them.

This leads us to the other major con. If your current model locomotives aren’t DCC-ready, then you’re going to have to buy and install decoders in them. The challenge for this depends on the locomotives you already have. Old models that have no DCC support can be quite tricky to install, and probably aren’t beginner friendly. Other newer models either have them installed, or have a quick-install plug inside the engine that allows for a super easy decoder install process. So just make sure what trains you’ve got before you dive in and start buying, to make sure you’re up for the challenge.

That’s about all you need to know about DCC for beginners. If you have any other questions that we haven’t answered here, feel free to drop them in the comments below and we’ll do our best to answer them!

Check out our post here to learn more about other scales of model trains! or just dive right in and take a look at some trains worth purchasing!