Thomas the tank engine might be one of the most popular model trains in the world.

I think a large reason that many of us are even into trains can be linked back to watching Thomas the Tank Engine or even reading the books!

Even today, Thomas the Tank Engine is still going strong and has brought in a whole slew of unique locomotives and other train-related friends to keep inspiring kids.

A Brief History of the Thomas the Tank Engine

While we all know Thomas the Tank Engine from the TV shows that aired in the 1980s, the origin of Thomas the tank engine dates back to World War II.

Thomas was nothing but a simple wooden train that belonged to a child named Christopher in 1942. His father, the Reverend Wilbert Awdry, an Anglican minister would make stories with the wooden train to tell Christopher to amuse him.

The stories were so good that Wilbert’s wife encouraged him to publish a book of them. He published his first story in 1944, but there was no mention of Thomas in there. Thomas appeared in 1946.

The initial design of the character was based on an E2 class steam locomotive and it was drawn by Reginald Payne.

The book production continued and the last book was published in 2011.

Thomas made its first TV appearance on October 9, 1984. That is how we get to know our beloved blue tank engine.

It is Thomas the Tank Engine. We understand why a lot of people would confuse it with Thomas the Train though!

While it is a train, the character is only the engine. The passenger cabins and loading stocks are not characters in the show. They are not part of ‘Thomas’. Thomas can easily detach from them and connect with different leading stocks.

So it is not Thomas the train – It’s Thomas the tank engine. It is also mentioned in the title of the series, ‘Thomas the Tank Engine and Friends.

What kind of train is Thomas?

We just talked about how Thomas is technically a train engine and not a full locomotive. So, the design of Thomas was based on an E2 class steam engine.

The design was created by the creator of the story, Reverend Wilbert Awdry.

But Reverend Wilbert Awdry started telling the story of Thomas and his friends to his son, Christopher, based on Christopher’s wooden train toy.

So technically the original Thomas the Tank Engine is just based on a wooden toy, but in the show, he’s an E2 class engine. The design of that wooden train of Christophers is not based on any real-life steam/ tank engine.

What is the original Thomas the Tank Engine model?

The original engine model of Thomas the Tank Engine was an E2 class steam engine. It was picked by Reverend Wilbert Awdry for the book and tv show.

The London, Brighton, and South Coast Railway E2 locomotive was a British 0-6-0T steam train that was intended for shunting and short distance freight trains.

They were all scrapped between 1961 and 1963 after almost 50 years of service. None of them were preserved.

Who voiced Thomas the tank engine?

No one voiced Thomas the tank engine. No one voiced any character in the series. There is no direct dialogue between the characters.

Who are the narrators of Thomas the Tank engine?

Thomas the tank engine is a unique series, and it’s set up to seem like a father is telling stories to their children. This is why everything is narrated over the top of the animation.

There have been many celebrities that have narrated the series over the years.

The narrators in Thomas the Tank Engines The Railway Series:

The narrators in the Thomas & Friends Series

How many Thomas the Tank engine books are there?

There are a total of 42 books of Thomas the Tank Engine. There have only ever been two writers. First is the creator of the Thomas universe, Reverend Wilbert Awdry.

How many seasons of Thomas the Tank Engine are there?

Since the 1980s, there have been a total of 24 seasons of Thomas the Tank Engine.

Because of popular demand, there will be a season 25 aired in Fall 2021. You can catch that on Netflix and Cartoon Network!

There’s something really nice about having a tangible, toy that you can have in your hand. It’s also a great way for kids to learn about spatial awareness, and get something in their hands they can play with and use.

As much to commemorate the original wooden train that Christopher played with, as it is that it’s just nice to play with, Orbrium has designed a series of beautiful wooden sets that all connect and work together.

If you’re thinking about maybe grabbing one for someone special, the best bang for your buck is this: 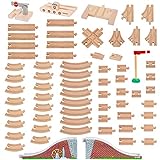 Alternatively, you can also take a look at the Thomas and Friends Super Station review we did a while back

So that’s all there is to know about Thomas the Tank Engine. From a wooden train toy to storybooks to our beloved TV show!

He sure did come a long way.

We can hope to see more of him in the future in season 25.

If you have any other questions we’ve missed, please leave a comment and I’ll do my best to answer them when I can!