We all remember what it was like to see Harry board the Hogwarts train for the first time!

It gave us a glimpse into what the wizarding world had to offer. The carts full of sweets and junk food were something we all craved! We all felt jealous of Harry for standing there on platform 9 3/4 waiting to board the Hogwarts Express!

You’re in luck though, you won’t be getting anything magical but you can still get a stunning replica Hogwarts train. Have a look below and find the right Harry Potter train for you!

What Is the Harry Potter Train Called?

The Hogwarts Express was the name of the Harry Potter train that made its journey from King’s Cross station.

It was originally going to be called the Hogwarts Castle, as an extension of the school though!

It might come as a surprise but it was the muggles who first created the train. Later on, it was then the Ministry of Magic that took the train and altered it to make it possible to travel to the wizarding world.

The train in the Harry Potter world might be very old as it has been around since the early 1800s but magic has kept it in peak condition. It was stolen from the human world but has now become the safest way to get to Hogwarts.

Is There a Real Harry Potter Train?

Since magic isn’t real you can’t find an actual train that goes to Hogwarts but there is still the next best thing!

The actual replica of the train is a GWR Hall Class locomotive that was painted in Hogwarts colors.

They made an error in the first film by using the wrong color for the train – It was first introduced as a green steam engine.

The most accurate model of the train would be the GWR 4900 which had been built in 1937. The train was hauled by the railway locomotive, Olton Hall. It had been repainted with Hogwarts colors and fitted with a new nameplate.

The locomotive that made its appearance in the movie still exists to this day!

Can You Go on the Hogwarts Express?

If you want to experience the Hogwarts train for yourself then you’re in luck!

Universal Studios has many grand attractions – one of which is the replica of the Hogwarts express. Like in the movies, the train has a compartment that can house 8 people at a time.

It’s a 676-meter-long ride so that you are definitely getting what you are paying for. It might not be the real Hary Potter train but it’s definitely a long and enjoyable ride!

Something that might surprise you is that there are actually two trains running on the tracks at any one time, just because so many people want to get to experience the same things that Harry, Ron, and Hermione did so many years ago!

But in the meantime, let’s take a look at some Hogwarts Express model trains you can have live permanently set up in your own house! 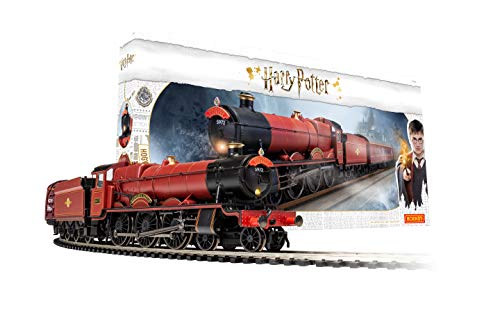 The Hornby Harry Potter Hogwarts Express is an awesome way to bring a little Hogwarts magic to your home. This super nice set from one of the leaders of model trains comes with a perfect replica engine (front train) as well as two passenger coaches.

It’s a real fan favorite and the trainset also comes with roughly an oval of 40″x60″ of OO gauge train track. It’s code 100 track, so this means that it will run on any HO scale track you have as well, you just need to make sure it’s the same code.

The best thing about Hornby is they’ve also made a ton of other accessories for the Harry Potter universe, so you can find other buildings to accompany it like a bunch of Hogsmeade stations buildings!

So what’s the biggest negative of this train set? Well, it’s actually not anything too major. The controller is a bit flimsy and is made of relatively cheap plastic. So it’s something you can definitely use for a while, especially for younger kids. But if you’re a collector, you can always look into upgrading it later on down the track. 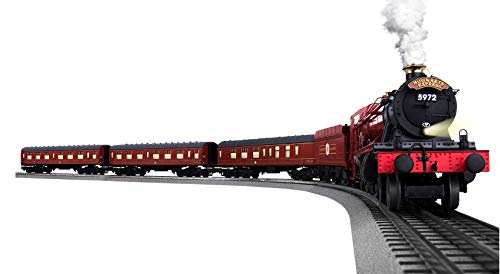 If you’re looking for a train that is a real showstopper for any occasion, the Lionel Hogwarts Express 4-6-0 is a must! It’s in O gauge so it’s a nice big size, and will definitely be noticeable wherever you put it.

The entire train is made up of five different parts which come in the classic Hogwarts color scheme. It comes with the classic Hogwarts Express engine, a coal car, and 3 passenger cars that are all near-perfect replicas of the real thing, as well as a 40×60″ of an oval track.

There’s a bunch of additional features that we feel make this train worth the extra money too! It features:

Bar the usual issues of occasionally receiving a product that doesn’t work which happens occasionally when so many are manufactured, not a single person has a bad thing to say about this train. So if it’s in your budget, it’s an absolute winner! 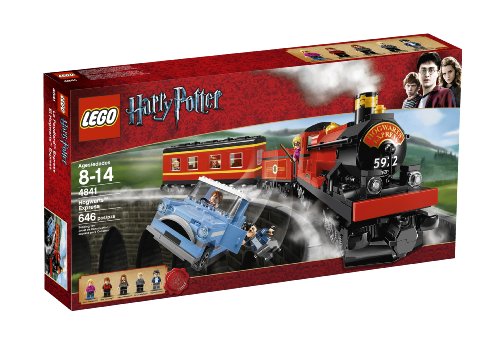 Okay, I get that this is cheating a little bit. Is it by definition a ‘model train’? Probably not. But damn if I don’t want to watch this race around the table on some track!

This Lego Harry Potter Express is a great birthday present for a kid or even an adult who loves both Lego or Harry Potter!

It comes with 646 pieces to build the Train, a coal car, and a passenger car. The Lego body means that you have more flexibility with construction – you can even remove the roof of the train to check out the interior.

It comes with a bunch of other fun add-ons like the Weasleys car, minifigs of all the main characters, and a bunch of luggage.

While it doesn’t come with it, it’s 100% compatible with the Lego power train’s function motor, if you want to upgrade it and really get the most out of this Lego train set.

There’s absolutely nothing I can fault about this train; it’s a bit more expensive than the older 75955 Harry Potter train that they released years ago, but it’s now a discontinued item and this one comes with a bunch more stuff anyway.

Once you buy these sets you will feel like you have taken a trip down memory lane. These train sets will help you get into what it felt like to be a student standing there on platform 9 and 3/4 boarding the train to Hogwarts.

If we had to pick one that would stand the test of time, it’d be the Lionel Hogwarts Express, but that’s totally up to you! Take a look at all 3 and pick the one that’s right for you!